My husband took me for a little weekend trip to Portsmouth, New Hampshire for my birthday. We love it there and I’d love to live near there but it’s quite expensive. We do a lot of walking, which is great for the legs and waist (or so I’ve heard

) – and it’s a good test of my knee, which did great actually. What a blessing, it is finally healing. It’s been almost a year since I was the dumb and wrecked it, acting like I was 25 years old or something.

We love this restaurant. We also connected with our friends Michelle and Tom who currently live in York, Maine, so it was great to see them. We had some oysters and I had some steamed littlenecks in butter. I don’t like littlenecks raw, which Keith had, but I LOVE them cooked. The ones steamed in butter aren’t on the menu, and when I asked our waiter if I could have them – because I’d gotten the chef to make them before — he came back and said “Yes, he remembers you!” which made me feel very loved and I enjoyed them even more this time.  Okay, I’m totally exaggerating there, but the whole thing did make me happy.

After that we went to Federal Cigar, which is a cigar bar my husband Keith wanted to invite Tom, our visitor to. This was also a lot of fun, but I like cigar bars actually. When asked what I wanted, I apparently had some kind of confused look on my face (not unusual) and the waiter kicked in and mentioned “Blood Orange Cosmopolitan?”  And I was like “Why, yes! That will do quite nicely, Sir.”  It was very tasty, and I sip, sip, sipped it the whole time so I’d only have one. “Keto” you know. I’m a very poor Keto-er, but I do try. Somewhat. Sometimes.

I also sometimes like to have a cigar – the ones I smoke are called Tabak Especial Cafécita Dulche. They are skinny and small and I definitely don’t smoke them often. Any more. Granted, in the past I went through too many and now I treat them as a rare rarity. That’s doubly rare. Even rare rare rare. Although we shall see when summer comes and we go out on the boat…  But anyway, it was fun having one there.

I actually like cigar bars, does that make me weird? They’re a little smoky, a little dark, there are black and white retro photos of celebrities smoking cigars…  it’s just kind of cool.  I’ve never smoked a cigarette in my life, thank goodness (ok, there was that one time… which was hilarious) – but thanks to my grandmother, I wanted to be like her and not like literally every other member of my family that I ever knew growing up, who smoked like chimneys. (Thank you Grammy, for showing me that I didn’t have to follow the crowd from an early age).

The next day Keith and I took a walk, and we kept commenting how dead the streets were in Portsmouth. It seems kind of weird! It’s such a great walking town with tons of interesting shops, and yet we went there before Christmas and now in early February and there were very little people walking around. Granted, February is slow but there was NO snow anywhere, and there were very few cars even out. I guess we were out kind of early too so that could be why. It was a Monday, so I guess people were working? Everyone but us I guess.

So we walked down to Strawbery Banke which is always interesting. I took some photos and really liked this 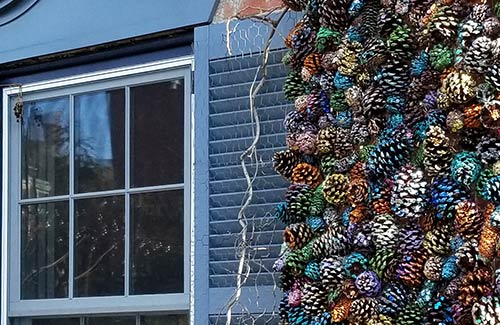 one of a decaying painting on the side of a building with a black cat on somebody’s head.  Weird. Wild.

Of course nothing was going on there on an early Monday morning but we did go once a couple years ago right before Christmas and it was really cool. You could almost imagine it being the 1600’s or 1700’s. At Christmastime, it was very Dickensian.

This image of some painted pine cones on an old house in Strawbery Banke was cool also.  The colored pine cones swag went from the roof to the ground and were iridescent colors.

I’ve always felt very fortunate to live so close to the ocean, it is part of my DNA and I have to go to the ocean several times a year. As a kid I didn’t realize how lucky we were and I can remember my mom saying in her later years when she was very ill that she felt if she could just go and put her feet in the ocean she’d get better. I can pretty much understand that now. As a kid or teen it seems so often that these moments go ‘whoosh’ over your head and you just 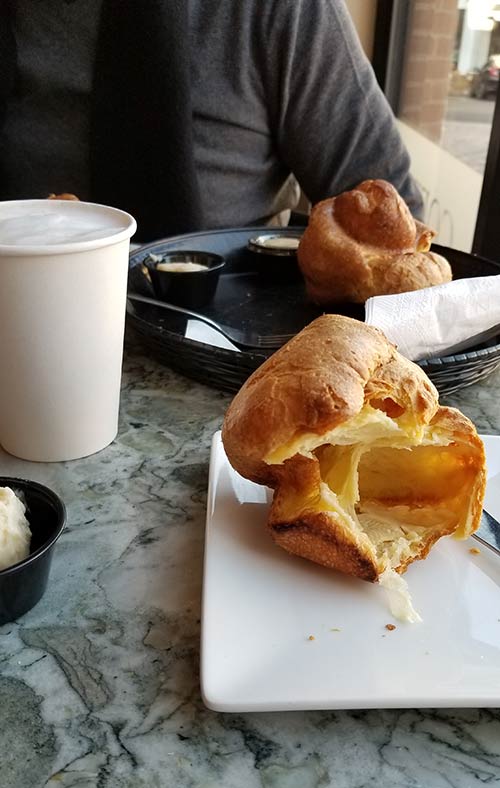 don’t appreciate them at the time.

My birthday breakfast we went to Popovers right nearby from our hotel and had — popovers!  These were amazing. And I SAY “Gluten-Schmuten!”, this gut-challenged lady wasn’t going to say no to one of these gorgeous crispy things. I also had a mocha latte, because hey, it was My Day! Later in the day we searched around for a nice restaurant (because all I wanted was some lobster for my birthday #spoiled) but every one we went to was closed (despite what Google was telling us!) and it was getting annoying. Not for me so much, I was in just such a good mood but I could tell my dh was getting annoyed. We ended up at the Weathervane in Kittery, Maine which was certainly serviceable – seeing how I had a double Lazyman’s 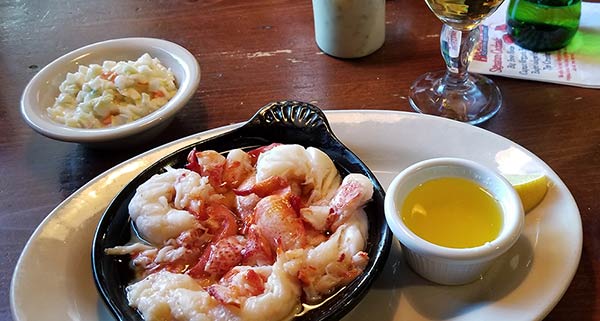 Lobster. I would say I made out quite well for my birthday meal! Keith also bought me a few sweaters at Clay’s earlier and the only thing I didn’t get was some Truffle Tres Latte cheese at our favorite stop Corks and Curds.

So I’ll have to wait til next time to get my amazing cheese. Joanne has a great shop and I highly recommend you visit it if you ever go to Portsmouth, and if you like great cheeses and wines and other cool stuff.

All in all I had a great birthday trip – my husband is very thoughtful and we just love the city.  Already can’t wait til next time. 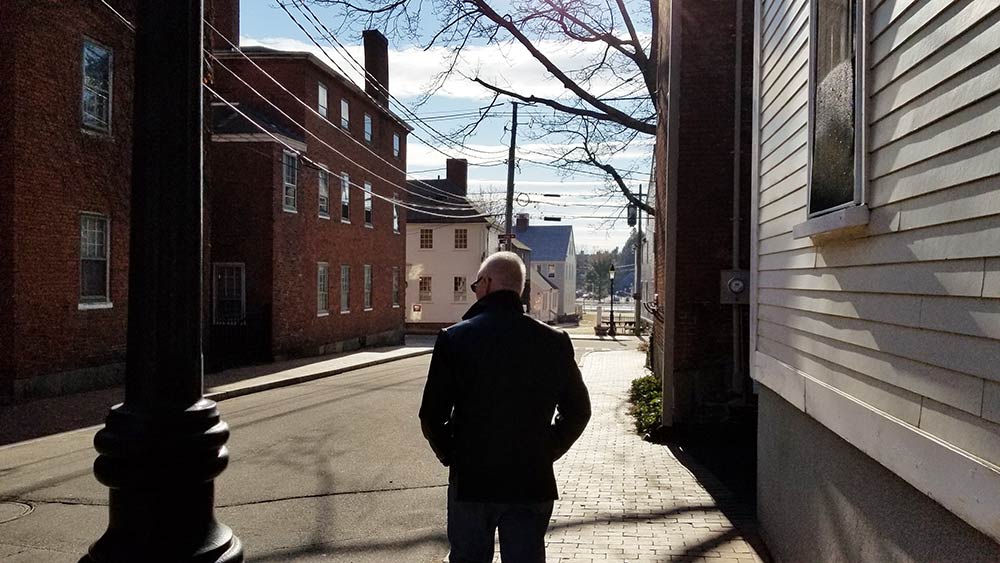